Story behind "Half & Half" 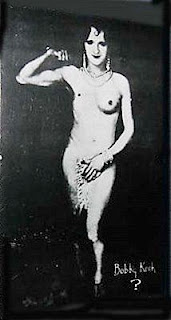 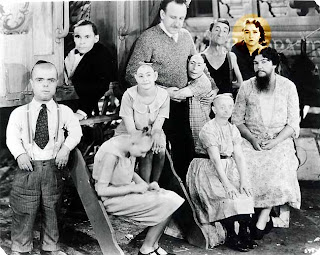 These people usually claim to be hermaphrodites, people born with both sex organs, and some actually were. But even those who may have been true hermaphrodites usually gaffed their appearance. One side of their body would seem to be a man's: defined muscles, hairy arm and leg, perhaps a beard or mustache. The other side would appear feminine: smooth skin, shapely leg, perhaps a breast, makeup, long hair. (In the picture to the right (a still from Tod Browning's film, "Freaks"), the person with the highlight is Josephine-Joseph, a famous Half & Half who appeared in the film.) They would wear clothes that were male on one side and female on the other to heighten the effect.
The photograph at  the top is of Bobby Kork, a Half & Half from the 1940s and 1950s. It was probably from his postcard. Such people sold cards to the public for a dime. These usually had a picture of the person on the front and their "life story" on the back. Selling such cards provided a living to the individual displaying him or her self. Besides the postcards, there was also the "blowoff". Certain acts would do something extra for the cost of a mere quarter. In the case of the Half & Half, this would be to expose their lower regions. Blowoffs were often restricted to "gentlemen" only.
It is not certain, but probably Bobby Kork, who also appeared under the name, Cherie, was not a hermaphrodite, but a total Gaff. Since he worked in the 'forties and fifties', he might not have been contemporary with the other real freaks mentioned in the poem.