Who and What of Coffee and Poetry 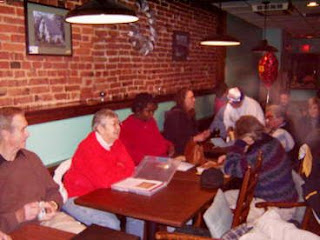 Here is how the poem, "A Short History of Coffee and Poetry and Thoughts of J M" came to be.
There was a time before some corporate suits, who probably have MBAs, ignorance of the arts, dull lives and no common sense, decided it was in the business plan, when bookstores would support poet and author groups. They also had regular readings, called Open Mike nights. Perhaps some still do. But the big booksellers here have done away with both groups and mikes.
A spokesperson for one chain told The Old Goat it was decided these were not profitable, but they would still keep discussion groups, like the ladies discussing Romance Novels on the basis they bought books.
Writers, even penny poor Poets, buy books. The Old Goat didn't shop the particular chain who gave him this information until he was in such a group  and ever since he has made many, many purchases there. Even when groups met, many members would browse about before and after the meeting and buy books. Then they generally sipped their overpriced coffee from the overpriced bookstore cafes during the meetings.
And it cost the corporation nothing, unless they considered the floor space wasted where groups sat. However, these stores did not remove the chairs or fill that space with shelves in the several years now since they stopped sponsoring such gatherings. People still seat themselves in those spots for the evening or the day to read, turning the bookshop into a public library. So, why buy the cow when you get to drink the milk for free; why buy the book you can read for free?
But that is neither here or there or has anything to do with the poem directly.
Before The Old Goat was even in a group, back in 2000, he was wandering through one of these big bookstores and this man on crutches was trying to read his poetry. Each time he would begin, the cappuccino machine would begin its loud chug and this poet would grow angrier and angrier.
Perhaps it was a year later when The Old Goat learned the name of the poet, J. M. He was a former teacher and a former veteran of Vietnam. The war had left him scarred in body and psyche. One difficulty it had given him was an aversion to loud noises. This made the interruptions of the cappuccino machine more than mere annoyance. It made them painful.
When The Old Goat got into some groups he began to write a poem about how poets read in bookstores in the 2000s and not coffee houses as in the 1960s and he remembered J.M. and that blasted machine.