The story behind "Middle" 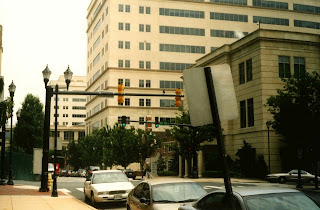 The poem, "Middle" that appears in Urban Undulations came about this way.
In 2003, The Old Goat's daughter was deployed to Iraq. Her Army unit did a dark landing in the northern mountains of that country right after the USA dropped the first bomb. From there they convoyed down to Kirkuk and set up camp in a bombed out building.
A couple of months later The Old Goat took a long walk around Wilmington taking photographs. It is what he does for fun - walk and take pictures. He has done this all his life since he was old enough to use a camera. He has walked around cities all across this country taking photos of anything that interested his eye. He had never been confronted, questioned or threatened for doing this before.
He had been doing this for a few hours this particular day and was making his way back to his car to go home. On French Street he paused to take a shot up the way he had just come. Just as he was focusing came a tapping on the shoulder and when he turned around there was a man in a brown uniform with security stitched across his breast pocket. He was employed by a credit card bank that is no longer in existence.
But The Old Goat wasn't in the bank or on their steps. He was standing by the curb of a public sidewalk on a public street. The man began questioning him about what he was doing, where he was from, who he was taking pictures for and why. Was he a tourist? The Old Goat told him he was taking a picture of the street, and he put the camera to his eye as he answered these questions and snapped the picture. He was calm outwardly, but was angry at this interrogation inside. After taking the picture he walked away and noticed the security guard was now talking into a radio attached to his shirt near his shoulder. He didn't try to stop The Old Goat from leaving.
When The Old Goat reached the cross street, he heard a siren coming in his direction; probably just a coincidence. No cops came and got him. Shortly after that he passed one of the government buildings on the next block and there along the sidewalk was a huge metal statue of a scroll or parchment with the Bill of Rights carved into the face. The irony was not loss on him.
He really wanted to take a picture of this, but this was a government building, a federal one, and he didn't want to press his luck in these post-9/11 days, so he just walked on and went home.
That evening he wrote the poem, "Middle".